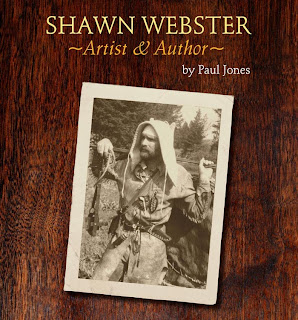 Much has been written in the past about Shawn Webster, but in recent years there have been some changes although much remains the same in the life of this talented artist and enthusiast of early American lifestyle. Shawn still lives in the mountains of Utah, near Cedar City, still hunts with a muzzleloader, fishes and traps in the 18th and19th century manner following in the shadows of Jim Bridger, Jedediah Smith and Joe Meek. He still tans all of his own hides for use in his work using both the bark and brain tanning methods. But there have been some exciting new developments for Shawn. Among other things, he has authored a chapter on 19th century beaver trapping in the Book of Buckskinning VIII, but even more ambitiously, he has published a book titled In The Image of A. J. Miller, a full color volume uniquely showcasing the art of Alfred Jacob Miller and Shawn’s recreations of the clothing shown in those paintings. 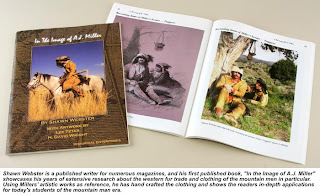 In 1837 Baltimore artist Alfred Jacob Miller went west with an expedition headed up by the famed Scotsman, Sir William Drummond Stewart. Miller was to chronicle the trip in sketches for Stewart in order to later work his sketches into finished paintings. Miller attended the ’37 rendezvous in the Rocky Mountains and was the only artist to ever depict one of these events. During this journey Miller did a large number of drawings and paintings of the mountain men, Indians, and geographic locales he encountered. Shawn has taken a selection of Miller’s art, had well known artist frontier artist Lee Teter duplicate these works, and then faithfully recreated the clothing and accessories shown in the paintings. He has placed Miller’s subject on one page and a photo of his reproductions duplicating the painting on the facing page for comparison. It is a very interesting concept, and most useful to anyone depicting this period of frontier history. 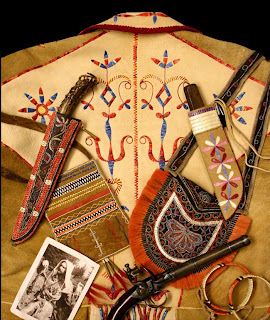 Notably, Shawn’ quillwork was included in a successful major museum exhibit, The Art of the American Frontier at the Owensboro Museum of Art (Owensboro, Kentucky), curated by Russell Young. This unique and cutting edge exhibit featured both antique art and outstanding works by 41 of today’s leading contemporary makers.

The quality of his work steadily improves as he faithfully reproduces the techniques passed down by generations of quillworkers. But also as a creative artist, he develops new styles which express his own ideas, all the while being cognizant to preserve the traditions of the past. Shawn is well known for his exquisite quillwork and beautifully brain tanned hides, though he is interested in all forms of early American art. He is constantly seeking out new formats through which to express his art.

One of the most demanding of these new works of art was inspired by renowned frontier artist H. David Wright. David commissioned Shawn to make a quilled coat in the style of 19th century Metis coats. Says Wright, “We wanted this to be an exceptional work of art, so Shawn and I researched Metis coats in collections throughout North America and Europe. I photographed many coats for construction techniques and quill designs and we then selected what we felt was the best of the best. Shawn beautifully incorporated all our research into a fine, beautiful work of art.” 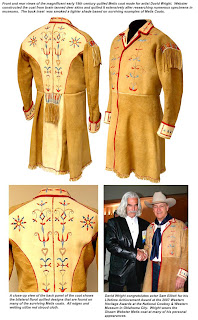 This coat was featured in the Owensboro Museum exhibit catalog with a full page color photo. It is also shown in this article. Beautifully quilled and made from six brain tanned hides smoked in two colors, the coat is truly a work of art. David has been seen wearing this fabulous coat at his gallery shows and events throughout the country. As a result, Shawn’s reputation continues to grow in many areas of the art world. According to Shawn, he is in the process of finishing another of these coats, the first one to be offered on the open market. 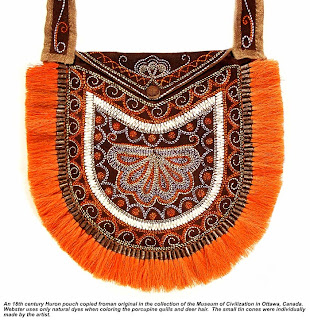 Several years ago, Wright also commissioned him to make a copy of an 18th century Huron pouch that is in the Museum of Civilization in Ottawa, Canada. Wright had photographed the pouch in 1987 in preparation for article he wrote on American Indian quilled art. He made detailed photographs and obtained information about the construction techniques used in the bag by examining the original during a trip to the museum (then known as the Museum of Man). Much to Wright’s chagrin, after he commissioned Shawn to duplicate the pouch, he later learned that the pouch contained moosehair embroidery, which he had misinterpreted as quillwork. However, because Shawn’s quilling techniques are so finite, the quilled bag looks to be an exact duplicate of the original. Wright reflected that… “Shawn took the information I furnished him and faithfully reproduced it in quillwork. Because moosehair embroidery is sometimes difficult to identify from fine quillwork, I’m the one who misinterpreted the original art. Shawn did a fine job with his work and it’s almost impossible to tell the difference.” The pouch is featured in this article. 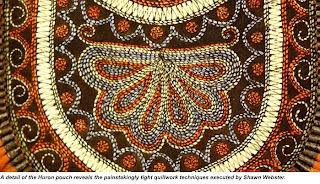 Since pouches are one of the most practical canvases on which Native Americans placed their designs, it follows that when writing an article on an artist working in this medium, those would be one of the most common forms to illustrate. As such, we have chosen three to be illustrated here: the Huron pouch previously mentioned; a copy of an 18th century Ottawa pouch; and one with a Shawnee design. The Ottawa pouch features the “underwater panther” design. This motif holds great spiritual meaning for Native Americans and thus many contemporary quillworkers are reluctant to recreate it. This pouch is a prime example of the work Shawn does in that it is true to its heritage, and is beautifully aged to give it that eye appeal so liked by re-enactors as well as collectors. Additionally, it is constructed and quilled in such a way as to be completely compatible with hard use. The strap is backed and the bag is lined with hand-woven linen. It is, in all ways, serviceable while maintaining that authentic, period look – a must for those living history buffs who use these works in the field.

The third pouch we have chosen is what is generally accepted as a Shawnee design. Again, while faithfully and painstakingly maintaining authentic design our artist has recreated a product that will provide service for those who wish to use it as part of their persona in re-enacting or present a focal point for any collection of Native American art. The original which influenced this design is in a museum in Germany. 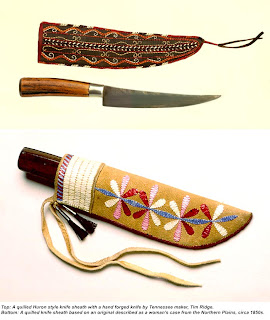 Of equal importance in items of decoration to early Native Americans was the knife sheath. Whether it be made for the larger belt knife or what is termed a “neck knife”, these sheaths provided an ideal platform on which to display their art. The neck knife sheath pictured next to the Shawnee bag is of the classic Central Great Lakes design.

The larger belt knife sheath is of Huron influence but is freely designed by Shawn. It is a belt size, 9” sheath with a stiff bark tanned liner covered with brain tan deerskin. All of the quills Shawn uses in his work are dyed with natural dyes. The knife is an English style trade knife hand-made by well known Crossville, Tennessee knife maker Tim Ridge. 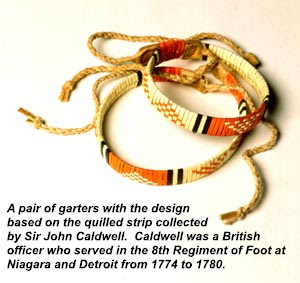 Shawn Webster’s art continues to improve as he researches his subjects and applies his knowledge to his artform. He is always excited about taking on new challenges and is willing to talk about any project if you will call him at (435) 586-2326 or email him at shawnwquillwork@yahoo.com .

Reprinted by permission of the National Muzzle Loading Rifle Association/ Muzzle Blasts magazine. For information on the NMLRA please visit the website at www.nmlra.org.
Posted by Contemporary Makers at Monday, June 22, 2009