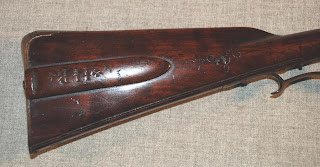 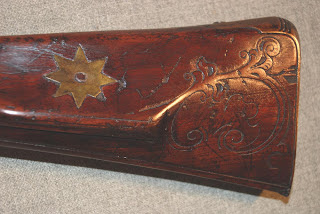 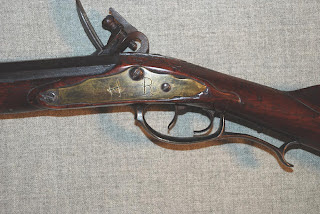 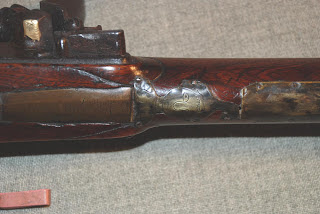 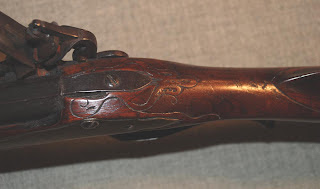 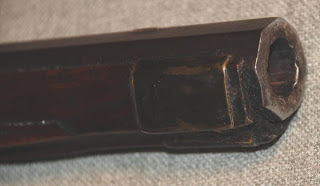 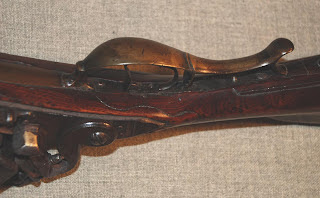 As I see it, this just may be what I would term an 'arsenal' rifle, as it appears quite hasty yet competent. Possibly it was stocked out of parts ca. 1777-1779 while Allentown was crowded with Philadelphia evacuees and a state arsenal, or gun repair/fabrication facility, was organized there. It appears petite in some ways but in reality is a big, wide gun. The buttplate is certainly cut-down from a fowler butt and has a plugged screwhole at the rear, so it seems reused and installed quickly at something of an awkward angle. Lock - which obviously uses a replaced cock and frizzen - looks like an earlier German lock and the sideplate has been cut-down from a larger and earlier sideplate. It too was reused as the tail looks cut-off, the rear lock nail hole is filed out very large to accommodate movement and the nose is chopped. There is still a hint of the original screw hole in front of the forward lock nail! The set triggers seem original but at some point the gun must have had another triggerguard installed as there are remnants of a different mortise fore and aft. And, this guard itself seems like a secondary piece as the rear finial was broken and has been riveted back together. Also all that sheet brass - the wear plate and funky liberty head inlay - are later additions to cover a worn through forearm (it's worn through right into the rammer channel). Also the wraparound nosecap was at some point removed and reinstalled but not quite in the same place - it's moved back a little. I don't know why. Maybe the rivets accidentally pulled. I don't know who "HR" was but obviously an owner. There is a VERY faint remnant of a signature on the barrel but it is impossible to make out. It appears to have been in script as some of the tails of the letters drop down over the edge of the top flat. Barrel is rifled, about 44 inches long and .54 caliber. Also you can see where at some point the toe got whacked and a piece sheared-off; it was glued and screwed back in plate and the buttplate straightened back out (there's a little crack there on the buttplate). Heel appears worn through and is now filled with lead. the set trigger adjustment screw is missing.

The buttplate is almost 2 full inches wide and the wrist is REALLY wide, like maybe 1 5/8" wide but only something like 1 1/4" tall under the guard. There seems to be some dishing there like on the later Moll/Rupp/Neihart rifles but because it's a straight stock there is no step although the lower butt molding abruptly terminates like it was a step wrist. There is curvature - a small amount - to the toe line. I really think this thing has Neihart written all over it but the signature, what little I can make out of it, does not appear as Neihart's big block letters. It obviously has some association with Northampton Co. and in particular the Allentown/ Whitehall area. Carving was all raised but is now worn almost flat. The tang carving and what is left of the carving around the entry pipe - and there isn't much left there, between wear and the brass plate - looks different from 'the usual.' The lock and triggers still work, and WELL, can you believe it?!!! It's certainly a different and exciting rifle. Beautiful cherry stock, deep color.
Posted by Contemporary Makers at Friday, February 29, 2008