Club Butt Fowlers were some of the first guns brought to this continent through the Upper Hudson River Valley by the Dutch traders who established a trading post at Fort Nassau. Once this post was abandoned, these guns were then taken to Fort Orange, farther up the Hudson River. This region was heavily populated with many Native American tribes eager to trade furs for newly discovered goods with the gun being one of the most valuable and important items. These fowlers were well liked and became popular from the 1650s well into the late 1700s.
The Club Butt Fowler that I replicated is featured in the “Early American Flintlocks” by James B. Whisker and David B. Hartzler. The original is in the David Condon Collection. 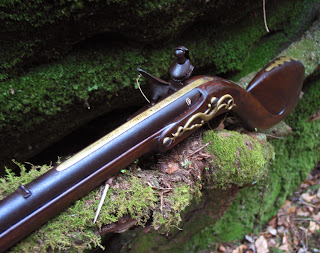 The 69 cal., 50” hand-turned round barrel features a two-piece brass sighting rib on top.  A dove tailed steel rear sight is proportionally positioned between the two-piece brass sighting rib. The front sight is a low blade type made from brass and silver which is soldered to the barrel.
The ignition for this fowler is supplied by a Brown Bess lock that has been reworked to resemble an early Dutch style one. I flattened the round Bess plate, stepped the tail and added file molding. To maintain the early style of the original, the round faced cock was also flattened and the bottom of the plate was banana shaped. I elected to use English Walnut for the stock, which is what the original was made from. The stock blank was donated by Dunlap Woodcraft. 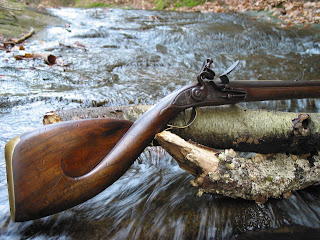 One of the most unique aspects of the gun is a double set trigger. I used a Davis trigger but wanted a different look for the front, so I forged a long slender front trigger, more closely resembling the style of the early originals.  To cover the double triggers, I made a rifle style guard, very similar in shape to the original. It had a somewhat c-shaped bow and a curled finger extension that laid up against the bottom of the wrist which set it apart from other fowler guards. This guard fits very well with the gun and is extremely comfortable. 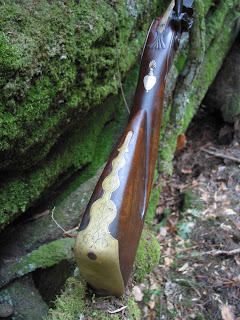 The butt plate was replicated from a Hudson Valley fowler seen in Tom Grinsdale’s book “Flintlock Fowlers: First Guns in America”. The various custom decorations on this gun include shell style tang carving, double barrel molding, ramrod entry pipe molding, thin lock and sideplate molding, wavy entry pipe accent on the side of the fore stock, and a deep wrist notch into the side of the butt stock.  A silver and brass escutcheon decorates the wrist area, which is engraved with small border lines.  Engraving on the fowler was done by Ken Netting and performed in a Dutch style. The lock is engraved with tulips and florals. The top brass barrel ribs are done with small rococo and vines. The butt plate has a large Dutch tulip and various other flowers and vines. A stylized bird standing on a limb decorates the bottom of the trigger guard.  A silver cartouche has been chiseled into the barrel and is stamped with my touch mark. Also the top brass rib has been engraved with my name, which closely follows how original makers distinguished their work.  This gun was stained with traditional stain recipe that I formulated, and coated with a hand rubbed oil finish. All parts of the fowler were aged to resemble a 300 year old original. 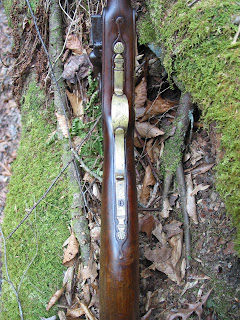 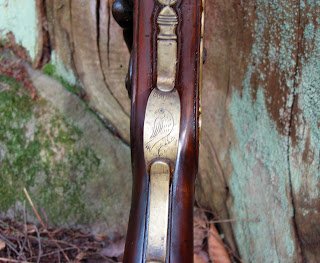 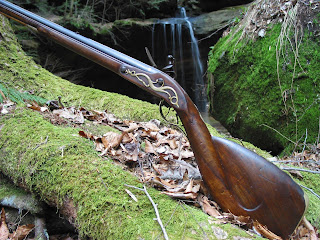 All features of this gun are hand made by myself with the exception of the lock and the double-set triggers.
More information about the making of this gun, the history of Club Butt Fowler, and Todd’s work as an artist can be found at his web site. There is also a zoomable photo gallery of the gun which shown close-ups of the gun. (This is an amazing piece so go look at the photo gallery for more photos and close-ups of Todd's work.)

The CLA Live Auction will be on Friday, August 20th at 4:00 PM.
Copy and photos supplied by Todd Bitler.
Posted by Contemporary Makers at Friday, August 06, 2010