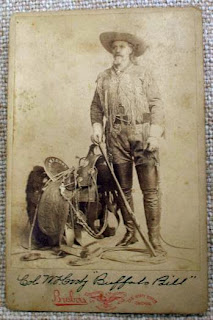 An autographed cabinet card of "Buffalo Bill" Cody.  On the back of the card is an advertisement for the Chicago Union Pacific and North-Western Line railroad company that transported people to see Cody's Wild West show.  This card was given to those traveling on the train to see the show and for a small amount, a nickel or a dime, Cody would autograph the card.  I got this card years ago from an elderly lady who, as a young girl, had traveled on the train, with her family, to see the show.  I also have a similar cabinet card with "Custer's Last Rally" on the front and the railroad company adv on the back.  I believe these were given out to people taking the train west to see the Custer Battlefield? 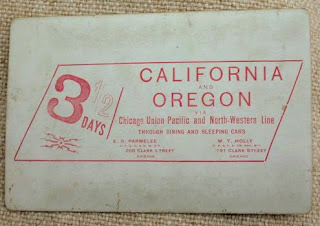 Copy and photos by Randy Hedden.
Posted by Contemporary Makers at Thursday, October 22, 2009