This absolutely original and authentic,American Scrimshaw Powder Horn is extremely clean, likely made during to the Revolutionary War period, though it bears no date or place. It measures about 6.5” long x 2” wide at the base. It has a carved hexagonal spout, with a matching hexagonal wooden end-plug. It also has its original wooden wide end cap, affixed with two Revolutionary War period small brass tacks to the horn. The wide base at the inner portion of the curve features the the Seal of the United States as a decorative device, a design which we are certainly familiar with today, measuring about 1.75” tall x 2” wide. In this hand-engraved “Folk Art” style design, the right wing is pointed upwards while the left is pointed down. This ornately carved American Heraldic American Eagle is featured, shown facing right and grasping both Olive Branches and Arrows in its talons. A ribbon device is held within its beak reading, “E PLURIBUS UNUM.”

The base portion at the outer curve of the horn features the early United States Seal featuring an American Eagle atop a Globe and a Shield, designed in “Coat of Arms” style. A 13-Star American Flag upon a pole at left and a Liberty Cap upon a pole at right at at either side. Under the Coat of Arms is the legend, "UNUM ILLORUM." The 13-Star American Flag features the historic Star pattern as designed by Declaration of Independence Signer Francis Hopkinson, which he created in 1777. Initials scrimshawed onto this Powder Horn read, “J. W. G” with the word “BOW” also engraved underneath. This smaller size Primer Horn was most typically used by members of the cavalry for priming their flintlock pistols. Overall, the artwork is superior in its quality. There is true and light actual wear seen, thus indicating the use and full authenticity of this historic, nicely decorative horn. It is in impressive “museum” quality being a perfect Revolutionary War Period specimen for display.

“E Pluribus Unum” is Latin for "Out of many, one" (alternatively translated as "One from many"). It is a phrase adopted on the Great Seal of the United States, along with Annuit Cœptis and Novus Ordo Seclorum, being adopted by an Act of Congress in 1782 during the American Revolutionary War period.

The motto was suggested in 1776 by Pierre Eugene du Simitiere to the committee responsible for developing the Great Seal. At the time of the American Revolution, the exact phrase appeared prominently on the title page of a popular periodical, The Gentleman's Magazine, which collected articles from many sources into one "magazine".

This in turn can be traced back to the London-based Huguenot. Peter Anthony Motteux, who used the adage for his The Gentleman's Journal, or the Monthly Miscellany (1692-1694). The phrase is similar to a Latin translation of a variation of Heraclitus's 10th fragment, "The one is made up of all things, and all things issue from the one." A variant of the phrase was used in Moretum, a poem attributed to Virgil but with the actual author unknown. In the poem text, color est e pluribus unus describes the blending of colors into one. St Augustine used a variant of the phrase, ex pluribus unum, in his Confessions.

While Annuit Cœptis and Novus Ordo Seclorum appear on the reverse side of the Great Seal, E Pluribus Unum appears on the obverse side of the Seal, which as Designed by Charles Thomson acting as the Secretary of the Continental Congress. The image is used as the National Emblem of the United States.

Originally suggesting that out of many Colonies or States emerge a single nation, in recent years it has come to suggest that out of many peoples, races, religions and ancestries has emerged a single people and nation thus illustrating the concept of the “melting pot.”

The first coins with E pluribus unum were dated 1786 and struck under the authorization of the State of New Jersey by Thomas Goadsby and Albion Cox in Rahway, New Jersey. The motto had no New Jersey linkage but was likely an available die that had been created by Walter Mould the previous year for a failed federal coinage proposal. Walter Mould was also authorized by New Jersey to strike state coppers with this motto and did so beginning in early 1787 in Morristown, New Jersey.

Lt. Col. Seth Reed of Uxbridge, Massachusetts was said to have been instrumental in having E Pluribus Unum placed on US coins. Seth Read, and his brother Joseph Read, had been authorized by the Massachusetts General Court to mint coppers in 1786.

In March 1786, Seth Reed petitioned the Massachusetts General Court, both the House and the Senate, for a franchise to mint coins, both copper and silver, and "it was concurred." E pluribus unum, written in capital letters, is included on most U.S. currency, with some exceptions to the letter spacing (such as the reverse of the dime). It is also embossed on the edge of the dollar coin. (See United States coinage and paper bills in circulation).

According to the U.S. Treasury, the motto E pluribus unum was first used on U.S. coinage in 1795, when the reverse of the Half-Eagle ($5 gold) coin presented the main features of the Great Seal of the United States. E pluribus unum is inscribed on the Great Seal's scroll. The motto was added to certain silver coins in 1798, and soon appeared on all of the coins made out of precious metals (gold and silver).

In 1834, it was dropped from most of the gold coins to mark the change in the standard fineness of the coins. In 1837, it was dropped from the silver coins, marking the era of the Revised Mint Code. An Act of February 12, 1873 made the inscription a requirement of law upon the coins of the United States. E pluribus unum appears on all coins currently being manufactured, including the Presidential dollars that started being produced in 2007, where it is inscribed on the edge along with "In God We Trust" and the year and mint mark.

After the American Revolution, Rahway, New Jersey became the home of the first national mint to create a coin bearing the inscription E pluribus unum. (From Wikipedia) 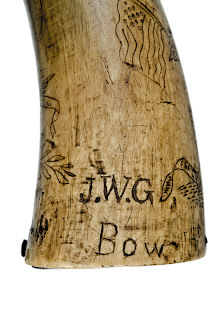 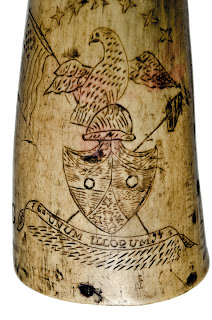 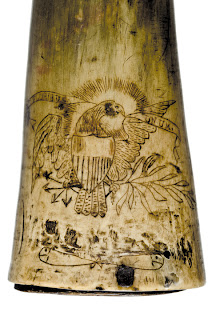 Copy and photos from Early American.
Posted by Contemporary Makers at Sunday, November 25, 2012