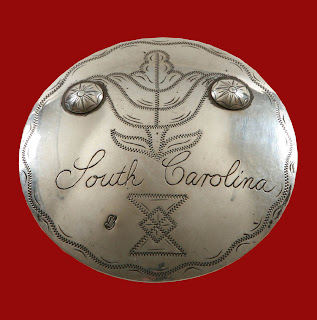 “Honest Brother” Dave Hughes has something just for you. Patterned after the original that was found in Alabama, this “round shell” type silver gorget was made especially for this year’s auction. Like the original, Dave has engraved it on its convex surface, decorating it with traditionally native motifs like opposing triangles, diamonds, a cross that represents the thunderbird of the upper world, a rattler that is understood to represent the underworld, and the four directions just like the original. Then curiously, the totally European words “South Carolina” have been hand engraved in old time scripted lettering just like they were on the original. David is one of today’s top traditional trade silver makers, and he has donated a copy of a rare and unique piece of documented trade silver.
The CLA Live Auction will be on Friday, August 20th at 4:00 PM.


Copy by T.C. Albert and photo by Bob Webb.
Posted by Contemporary Makers at Wednesday, August 18, 2010