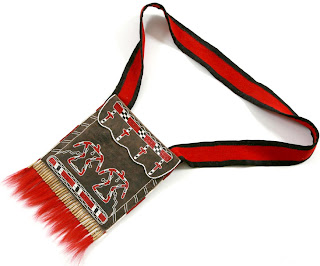 A quill decorated, native style shoulder bag is also a useful and necessary item for life on the trail, if you have one, then you know what I mean , and if not, then this item may be for you. With that in mind Michael Taylor has made a “Double Thunderbird” porcupine quilled pouch. This bag is inspired by and borrows elements from two separate originals, the first is found in the British Museum and documented in the book Thunderbird and Lightning by JCH King, and the second is housed in the Speyer collection. The quills are carefully hand dyed red, black, or left natural and match the color scheme found on the two originals. Inspired by even a third original bag, the Shawnee style strap is based upon an early 19th century piece housed in the Linden Museum in Germany. Michael used only brain tanned leather that he dressed, smoked and dyed himself. The same is true for the rolled brass cones, and of the hand plucked, sorted and dyed quills which he used for embellishment. This pouch is much like the work being crafted by the Ottawa and Ojibwa in the late 18th or early 19th century, and displays the technique, appearance and stylistic decoration used by Native Americans to create similar pouches during that time period. 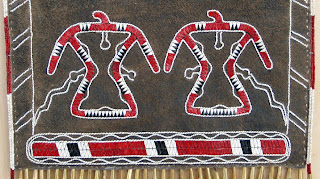 Copy by T.C. Albert with photo by Bob Webb.
Posted by Contemporary Makers at Friday, August 13, 2010