After the death of her second husband in 1768, Mary Delany lost her enthusiasm for the fashionable pastimes of shell decoration, silhouette portraits and needlework. At the age of 72 she began to imitate flowers in paper collage as an ‘employment and amusement... being deprived of that friend, whose partial approbation was my pride'. Her skill was such that the great eighteenth-century botanist Sir Joseph Banks declared that these collages were ‘the only imitations of nature that he had ever seen from which he could venture to describe botanically any plant without the least fear of committing an error'.

The idea came to her while staying with her companion, Margaret Bentinck, duchess of Portland, at Bulstrode in Buckinghamshire. She had noticed the similarity of colour between a geranium and a piece of red paper that was on her bedside table. Taking up her scissors she imitated the petals. Upon entering the room, the Duchess mistook them for real: 'Her approbation was such a sanction to my undertaking... and gave me courage to go on with confidence'. Delany later wrote that her work was intended as an imitation of a hortus siccus or collection of dried flowers. 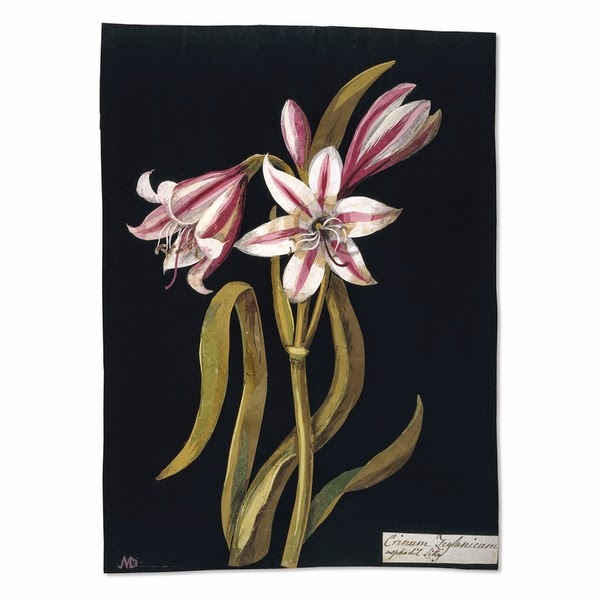 Commonly called the Milk-and-wine Lilly, the Asphodil Lilly originated in tropical Asia and east Africa and was introduced to this country in around 1770. An inscription on the back of the collage indicates that the flower was presented to Delany by Lord Rockingham (1730-82), a Whig politician and twice Prime Minister. 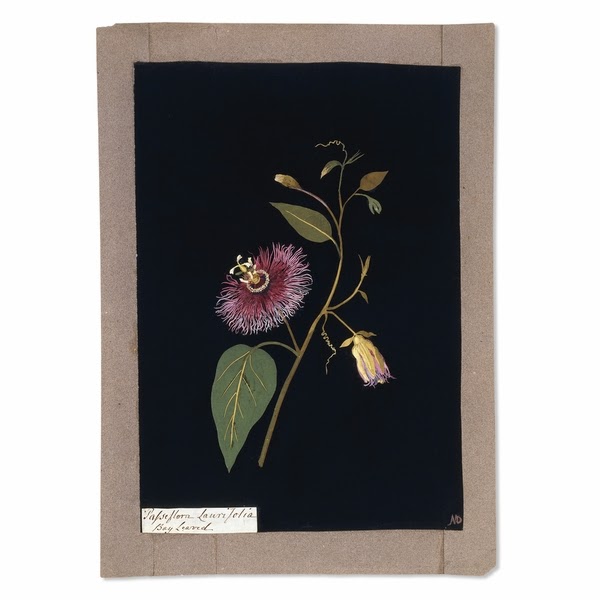 The common names of Passiflora laurifolia today are vinegar pear, water lemon and Jamaican honeysuckle. It originated in the West Indies and was brought to this country in the late seventeenth century. This specimen was given to Delany by John Stuart, 3rd Earl of Bute (1713-92), former Prime Minister and a keen horticulturalist, who grew exotic species in his home at Luton Park. She also received flowers from the Royal Botanic Gardens at Kew, which Sir Joseph Banks supervised. George III and Queen Charlotte were regular visitors to the house they provided for her in 1785 near the Queen's Lodge at Windsor. 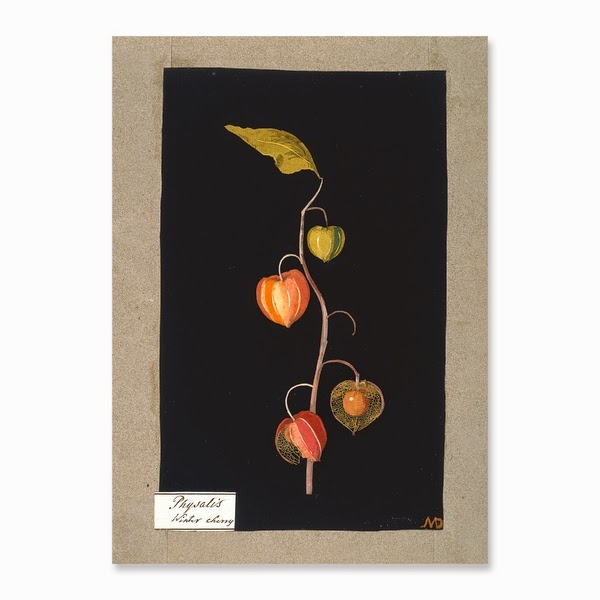 Occasionally she touched up the pictures with
The Winter Cherry, or Chinese Lantern as it is commonly known, is indigenous to southern Europe and eastern Asia. It was introduced to this country during the mid-sixteenth century. Many friends sent Mrs Delany flowers from their gardens for her to copy and she recorded their botanical and common names, the place they were found and the date on each of her 'paper mosaicks'. Most of her collages were made at Bulstrode, the home of her dearest friend, Margaret Bentinck, Duchess of Portland, with whom she spent seventeen summers after Dr Delany's death in 1768. She created nearly a thousand collages before failing eyesight caused her to stop in 1782. They filled ten albums, which came to the British Museum in 1897.

Copy and photos from The British Museum.
Posted by Contemporary Makers at Sunday, July 20, 2014