Weapons from the National Maritime Museum 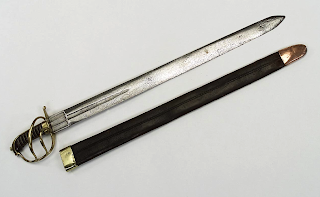 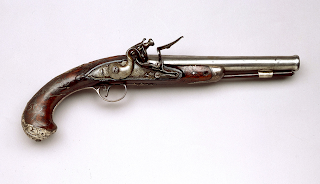 This pistol was presented to Captain Peter Reed by the Council and Assembly of St Christopher’s, one of the Leeward Islands in the Caribbean. Captain Reed, commanding the privateer ‘Oliver Cromwell’, destroyed several French privateers in the West Indies in 1759. Privateers were private warships licensed to raid enemy shipping for profit. The pistol is half stocked and made of walnut with a repoussé silver butt cap, a silver trigger guard and a silver fore-end cap. The pistol has a silver side-plate, a silver escutcheon plate and extensive silver wire inlay all over the stock itself. The butt cap is made in the form of an antique helmet, draped and surmounted by a tented canopy with a floral trophy above. The side-plate is made in the form of a military trophy of guns, swords, shields etc. The oval escutcheon plate rests on a trophy of guns surmounted by an antique helmet. The trigger guard is engraved with a military trophy and a plain silver ramrod pipe. The ramrod is fitted to the barrel. The pistol has a sidelock, flintlock finely chiselled and decorated; it is also fitted with a sliding safety catch. The barrel is a smooth circular section; the calibre is 0.65in. The escutcheon is inscribed with the words 'Given by/the Honble the/Council and Assembly/of the Island of/St Christophers to Captn Peter Reed/of the Oliver Cromwell/Private Vessel/of Warr/in Testimony/of his Good/Services'. 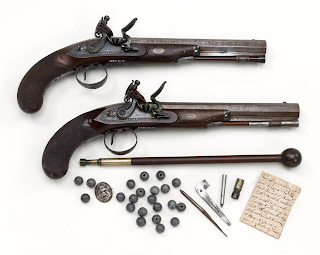 Pair of flintlock duelling pistols owned by Captain William Waller (active 1794-1807). The stock is made of walnut with chequered grips and rounded butts. Fitted with two silver ramrod pipes both containing ramrods. Silver trigger guards which are engraved and end in pineapple shaped finials. Each has a flintlock, both containing flints. The lockplates are engraved with a leaf design. The barrels are octagonal and browned with narrow gold bands near lock. Fitted with rear and foresights. The calibre is 0.75in. The pistols are in a mahogany box lined with green baize which contains a cleaning rod, 22 lead balls, two patches and a small brooch in the form of a grotesque mask (possibly an escutcheon). There is also a handwritten note in the box as follows: ‘Pair of exceeding good hair Trigger Pistols best Twisted Barrels Patt British, roller, swivel and freed Locks. Golds bands Patt-holes. Silver escutcheons and Nose cap in a good Mahog Case’. A label in the box reads: 'Samuel Nock, Gun Maker to His Majesty, 180 Fleet Street, London'. Engraved on the lockplate and barrels is the name: 'H NOCK'. Engraved on the box is the name: 'Capn W Waller RN'. William Waller was promoted to Lieutenant 8 August 1793, Commander 12 June 1799 and Captain 1801. He commanded the Sea Fencibles in Dover in 1807. 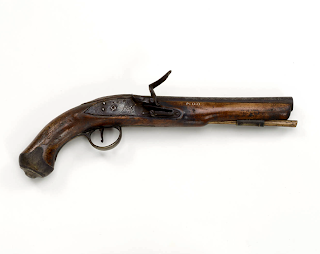 Flintlock pistol. The pistol is fully stocked in walnut with a brass trigger guard and brass butt cap. A single brass ramrod pipe is fitted. The lock is a flintlock, but only the pan and frizzen remains. The barrel is of circular section, smoothbore. The calibre is 0.75in. The pistol is inscribed with a Crown over 'GR DUBLIN CASTLE'. Dublin Castle was one of the official manufacturers of firearms for the Board of Ordnance in the 18th century. 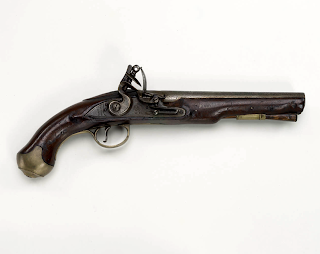 Flintlock pistol. The pistol has a walnut stock fitted with a brass trigger guard and a brass buttcap. A single brass ramrod pipe is fitted at the fore-end into which the wooden ramrod is fitted. The pistol also has a brass sideplate of roughly S-shaped outline. The lock is a sidelock, flintlock and is secured by two nails. The pistol has a barrel of circular section which is smoothbore. The calibre is approximately 0.65in. The pistol is decorated on the lockplate with a crown over the letters 'GR' and bears the inscription 'DUBLIN CASTLE'. The pistol also bears on the barrel two damaged proof marks, one of which may be a crown over the letters 'GR'. Dublin Castle was one of the official manufacturers of smallarms for the Board of Ordnance together with Birmingham and the Tower of London. 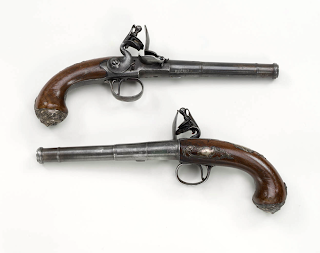 Pair of pistols said to have been given by Captain Thomas Hardy to Admiral Nelson. The pistols are half stocked in walnut with a pronounced rounded butt covered by a grotesque cap possibly depicting Medusa. A roccoco escutcheon plate is inscribed. Steel trigger guard with backward curl trigger. The pistols are sidelock, flintlocks. The steel spring is missing from both weapons though its large retaining screw is present in both cases. The pistols have a cannon barrel made to unscrew and fitted with a rectangular lug near the breech in each case to permit their removal. The calibre is 0.57in. A roccoco escutcheon plate is inscribed 'To Adm Lord Nelson/From his Friend/Captain Hardy/June 18 - 1801' Under the breech on each pistol are the three marks found together: 'Foreigner's mark', London Gunmaker's Mark and Proofmark of the London Gunmaker's Company. One breech is numbered '1' and the other '2'. 'GRIFFIN BOND STREET LONDON' is engraved on the top of the breech. These are attractive, well made and robust pistols. It seems probable that the attribution contained on the escutcheon plate is false. Nelson's rank is given incorrectly and in contemporary terms that is most unusual. The gunmaker Benjamin Griffin traded in Bond Street from 1735-1770.

Musketoon. The stock is made of walnut with a brass trigger guard and flat brass butt plate. The brass ramrod pipe contains a wooden ramrod with a flat brass tip. The lock is a flintlock, the rounded ordnance pattern. The barrel is brass with two steps and flared cannon muzzle. The calibre is 1in. Inscribed on the lockplate is 'JORDAN 1758' Crown over 'GR Crown' over an arrow. On the underside of the butt are two inspection marks - one is the standard ordnance stamp of crown over GR. Below this is a 'W' which could be the mark of gun stock maker - Richard or James Waller. The period when this gun was made during the Seven Years War was one when there was a lot of naval activity including naval boarding parties. Such a background could provide the necessity for this short barrelled arm. It might also account for the commercial proofs if arms were required urgently.

Copy and photos from the Royal Museums Greenwich.
Posted by Contemporary Makers at Saturday, May 11, 2013