"Make a Rifle that David Crockett Would Take to Texas" 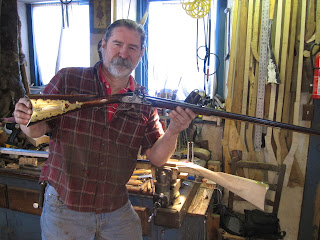 Somewhere sometime I heard a story that when Crockett wanted to explore "The Texas" he needed to sell some personal items (one being his watch) to fund the trip. He also needed a flintlock gun as he was using percussion almost exclusively.  Percussion caps were scarce in 1836, and almost non existent in Texas. So, living in Tennessee would have possible choices of Tennessee or maybe North Carolina arms.

Jud Brennan's "David Crockett" rifle is for me a great improvisation. He has perfectly combined a romantic fantasy with a historical overtone. The style and flavor of the gun are correct for the period. By adding the signature and partial motto, he has also introduced a literary commentary. This approach is quite rare in Contemporary work. Most makers are connected to form exclusive of story. That is not to say that every new gun need to have been the result of a fantasy or historical notion. What is interesting is that this one conjures up more to the viewer than just it's form.

*Crockett did own a York Pa. rifle in his younger days, it was sold off to cover debts.
*The Brennan rifle has a Getz Barrel 45" 45 Caliber.
*The antique Goucher lock was found on ebay, John Ennis added a fly to it for double set trigger use.
-Robert Weil 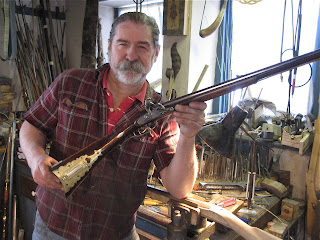 More photos of this rifle can be seen here. 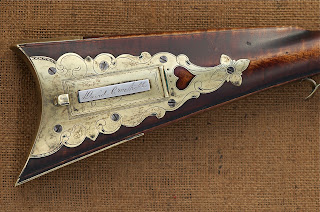 "I can tell you that Jud applied a great deal of thought to the making of that rifle - it was conceived as a whole piece from the start, it did not evolve. The earliest pictures that I took bore the unmistakable appearance of the final product. The rifle for Ed Louer was coming along at about the same time and shares some attributes - the captive patch box lid for example, but the Crocket Rifle was of a piece!"
- Dr. Peter Marshall

Photos by Dr. Peter Marshall. Copy by Robert Weil
Posted by Contemporary Makers at Thursday, May 30, 2013 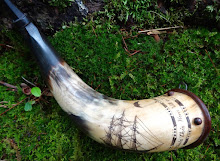