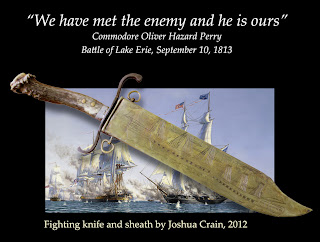 You may not have heard much about him yet, but I'm sure you soon will. One of the youngest artisans of the Contemporary Longrifle Association, Joshua Crain approached us about donating a project to the 2013 “War of 1812” fund raising auction, and then totally knocked it out of the park with this commemorative knife. We asked Josh if he might want to tell us a bit about himself and his project, and here's what he had to say:

“Hello, my name is Joshua Crain. I'm 17 years old, the 3rd oldest child in a family of 11 children. I have 9 sisters and 1 brother. In 2010 my family took a road trip to Alaska. I must say it was a most exhilarating experience, and would recommend the trip to anyone interested. While there I met Judson Brennan. He got me interested in knife making, blacksmithing, and gunsmithing, though I haven't attempted a gun yet.

Jud helped to get me a forge and a post vise, and gave me loads of advice. He also introduced me to Carlton Matteo, a blacksmith here in Michigan who has also helped me immensely. Many other people have helped me along the way, whether they were experienced artisans who gave me advice, or just friends and relatives eager to donate metal, deer antlers, etc. to help me along.

So far I've mostly made knives, but I've also made several other blacksmith projects such as a candelabrum, fire strikers, engraving tools, hooks, and various other tools and accoutrements. I will make custom knives if asked, and will attempt to make any other project I believe within my skill level and resources. My hobbies are music and my metal working.”

About the knife Joshua made for the 2013 fund raising auction he had this to say:

“The shape and design of this knife are my own, and were drawn out before I even really knew what a "period correct" knife might look like. The blade is hand-forged from spring steel which has been hardened and tempered to hold a good edge. The handle is made of deer antler with a "pewter" or lead-free solder alloy bolster. The hand forged S-guard is made of steel that has been brazed to the blade. Two copper rivets hold the handle to the tang of the blade. The handle has a brass plate and pommel cap, both have been hand-engraved. The plate on the side of the handle has my maker's-mark and the inscription, "1813-2013", and the pommel cap has a ten petal flower on it.

The sheath is made of sheet brass and is soldered together. Boy, was that a bear to get right! On one side it has a depiction of the Battle of Lake Erie, designed by "yours truly"!  On the other side is the inscription, "We have met the enemy, and they are ours. ~Oliver Hazard Perry, Battle of Lake Erie, Sept. 10, 1813”. The whole knife is well aged and the sheath is lined with leather on the inside. “

We also asked Josh why he decided to make and then donate this special knife to the 2013 CLA fund raising auction, and here is what he had to say about that:

“I first got the idea when I saw an advertisement for the auction in the Broadside (the CLA newsletter). I thought, "Hey. That sounds like fun." And since I'd never made a bowie knife, I thought that it could be my project. I also thought that since I am a fairly new maker, it might be a way to get my name out there to those you don't know of me yet. So with a little guidance and advice from Jud Brennan, I drew up a plan for the knife. The idea for the Battle of Lake Erie theme came when I was trying to decide what I was going to use to make this knife tie in with the War of 1812 theme. I was thinking over the battles of the war, or the few that I know of, I remembered the Battle of Lake Erie. I'd already engraved several ships previously just for fun, and decided that would be what I'd engrave on my project. My first thought was to engrave it on the knife blade itself, but high-carbon steel is incredibly hard to engrave. So I opted to make a brass sheath to go along with it, and to engrave that instead. I worked on it for several months and finally had a complete knife and sheath.
I must thank several people for helping make this knife: Ralph Prewett for donating the steel needed, my Dad for helping me harden and braze the blade and for encouraging me along the way, Jud Brennan for his expert advice on how to make the sheath and his donation of the antler used for the handle, and last but far from least, thanks to Carlton Matteo for his friendly encouragement. And, of course, I've got to thank God for giving me the gift of life and the gift of such friends.
God bless!” 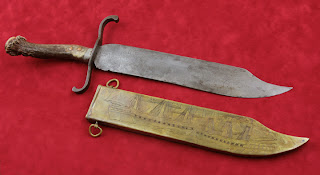 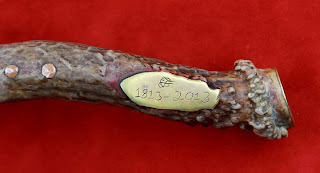 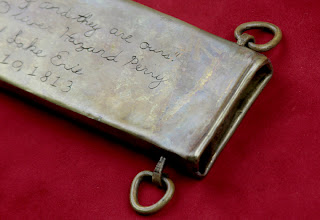 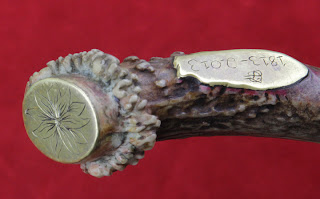 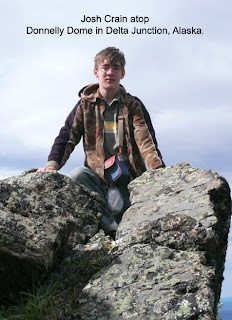 Copy and photos supplied by the Contemporary Longrifle Foundation.
Posted by Contemporary Makers at Thursday, April 18, 2013