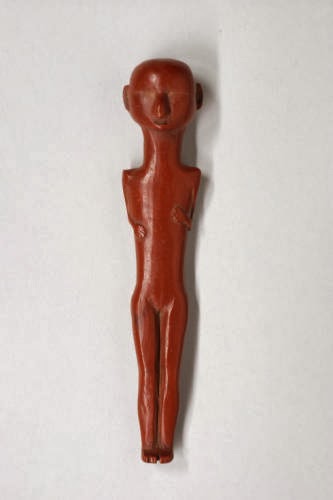 Description: This figurine, carved from catlinite, a type of red clay, dates from the historic period, which began around 300 years ago when Europeans first arrived in the region that now includes Ohio. Workmen digging a sewer line in Fremont, Ohio discovered the figurine in 1891. The historic Indian town of Junquiendundeh, where this figurine was created, occupied the land that would later be called Lower Sandusky and is now known as Fremont between 1760 and 1795. The figurine is approximately 5.5" (13.97 cm) tall. Red Minnesota catlinite became a popular trade item among Indian tribes in the Great Lakes area in the seventeenth and eighteenth centuries. However, it was most frequently carved and drilled to make beads; this human representation is quite rare.