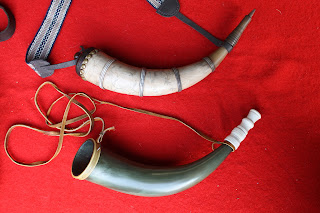 Horns by Scott Morrison of Oregon

The banded horn with plum wood base and an applied horn tip was inspired by an original North Carolina piece which descended in the Strayhorn Family. The original is pictured in Bill Ivey's "North Carolina Schools of Longrifles 1765-1865".

The blowing horn is patterned after the style of original hunting horns and feaures a single band and an applied antler tip. 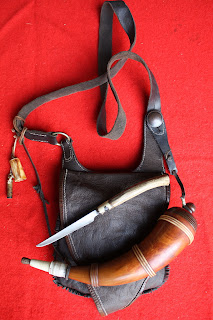 Pictures by Maryellen Pratt, taken at the 2012 Meeting of the Washington Historical Gunmaker's Guild with copy by Ian Pratt.
Posted by Contemporary Makers at Thursday, September 13, 2012