It is inspired by a riflegun by William Antes we know as RCA 53.  As I was designing and building the riflegun I imagined myself as an apprentice to William Antes in the time around 1768 to perhaps 1772.  Perhaps he had an apprentice he had become truly fond of and urged him to build a riflegun that he could take with him as an example of what he could do as he sought journeyman work further west.  I had the opportunity to photograph and study the original rifle when it was shown at the Lewisburg CLA show 2 years ago.  I and even had the opportunity to very briefly handle it.  As soon as I picked the original up I knew it was a shooter’s rifle!  It felt alive!  Its balance was superb.  I tried to achieve the same feeling with this rifle. The barrel was made by John Getz; the lock is a modified Chamber’s Golden age model. The castings and screws were purchased.  All of the other metal parts were made by hand by me.  The stock was hand scraped and stained with home-made vinegar-iron stain.  Over the course of the year I spent studying the original and building this riflegun I took a journey along the path of a master gunmaker’s apprentice. It was a journey well worth taking.  And so I named my riflegun ‘Journey’. 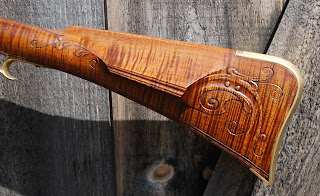