I would put it somewhere in the 1820s most likely, possibly early 1830s at the latest but ‘off the cuff’ I would assume 1820s.  It’s stylistically attributable to John Moll the third, which would be the grandson of Johannes Moll (Rockland twp. Berks Co. at least 1752 through 1763, Allentown Northampton Co. from then until his death in 1793) and son of John Moll II born in 1773.  This John Moll, the third, was born in 1796.

The problem with sorting these men out is quite complex.  All three were gunsmiths.  It is especially difficult to determine if the earlier rifles signed “John Moll” are John the elder (Johannes) or John II.  The rifles that are signed and dated, all of them in the early 19th century I believe as well as a surviving barrel or two (restocks), seem to illustrate that the earliest of the rifles signed “John Moll” might possibly be the same man, or might be very late rifles of Johannes.  If so, he (Johannes) was functional practically to the end of his life in 1793.  It also then requires an assumption that the first two John Molls had almost identical signatures.  *Almost* but not exactly - however, this could represent a change that occurred over time into the 19th century so it’s not black and white:  I’m talking about a change in a couple of squiggles or flourishes.  The earliest of the rifles signed John Moll seem to demonstrate a superior hand; these are rifle #12 on the KRA 2010 ‘Lehigh’ CD and probably the finest of all, the Best of Show year 2001 on the KRA ‘Best of Show’ 2012 CD.  In contrast, rifle #4 on the 2010 Lehigh CD is an example of a rifle which is generally assumed to be early work of John II; this would be the same man who built the Kindig swivel breech and also the man who used the ‘JM’ style monogram as cheek carving on a few rifles (including #4).

For reasons I have yet to ascertain to my satisfaction, John II is assumed to have given up gunstocking by approximately 1820, passing the business to his son John III.  Your rifle has a clearly later style, later furnishings and different John Moll signature.  It is much closer in style to the other later Molls working in Hellertown.

To complicate matters with the earlier two John Molls, I have seen two barrels marked in very large, inlaid (a gold or silver amalgam I believe) letters ‘IOHANNES MOLL’, one being in a 20th century restock of the 1960s or 1970s and one being a relic cut-down barrel.  I have been told of another but have not seen it and the individual who described it to me is now deceased.  The restock rifle does use some of the furniture from the original rifle, and to complicate things further, this original furniture looks exactly like the furniture on the two earliest rifles mentioned above.  So are these two rifles John I, or are they John II working either in his (living) father’s shop or immediately after his death with the same shop castings?  It’s very frustrating!

Ultimately, what is needed is a complete 18th century rifle to manifest with the Johannes Moll signature.  This would establish a baseline for the old man.  We have a baseline for John II in the dated rifles of the first two decades of the 19th century (Kindig swivel breech being the prime example. 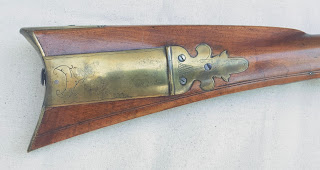 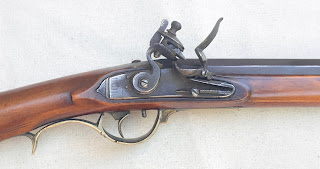