According to Moravian "Gun Making of the American Revolution", Andreas Albrecht lived between 1718 and 1802. He was born in Germany and in 1750 migrated to the Moravian community of Bethlehem, Pennsylvania. In 1759 he moved to Christian's Spring where he helped establish a trade school. At this time he also began a new rifle stocking shop until 1776 when he returned to Bethlehem and became manager of the Sun Inn. In May of 1781, he moved with his family to Lititz and reestablished himself as a gunsmith. This important rifle was found in England years before its counterpart, which is the Lion and the Lamb Rifle, was also found at the same place. When it was first brought back to the United States, it was missing its barrel, lock, sideplate and trigger guard, as well as the forestock slightly forward of the rear furl. The missing parts were professionally replaced using other examples for accuracy. The original inletting was still intact in order to provide the correct replacement pieces. The rifle dates circa 1760 and is one of the earliest Moravian made rifles in America. It was certainly taken as a war souvenir or battle trophy by an English officer probably during the American Revolution. The rifle has a deeply rifled, swamped, octagonal iron barrel with a brass front sight and a large iron rear sight, as well as a hooked breech. The period lock is inscribed "DRAPER" in the center. The brass furniture includes a classic Moravian sideplate with beveled edges and a molding behind the thumbnail rear tang, a Moravian trigger guard and a wide butt plate measuring 2 and 1/4 inches across at its widest point. There are original brass wire inlaid designs on both sides of the forend as well as behind the ramrod entry furl. There is a brass eight point Moravian star with engraved shading retained by a screw in the center. The rifle has a full length figured maple stock of early Moravian Northampton County form including a stepped wrist. Most importantly this rifle retains its original sliding wooden patchbox lid. Original sliding wood covers on early rifles are extremely rare as they were often worn and cracked, and were replaced with a brass patchbox. This patchbox is carved with an incised and relief scalloped shell. There is also a relief serpentine border around the lid and a series of incised designs and decorations, as well as small circles. Around the cover there are relief moldings as well as a stylized fluer de lis at the top, which is also decorated with small circles. On the left side of the buttstock there is a two tailed lion or dog in relief with claw footed legs and a split tail. The dog is also decorated with incised fur designs and small circles. The rest of the relief carving around the comb, barrel tang and other areas follows a more traditional approach. Below the cheekpiece is an incised tulip directly beneath the cheekpiece.

CONDITION: Very good as properly professionally restored as described above. Barrel and lock retain a matching, heavy brown patina. Lock is in its original flintlock condition and functions properly. Brass retains a pleasing dark mustard patina with some areas darker. A couple minor pieces of brass inlay are absent around ramrod entry furl. The rifle has a very good homogeneous "as found" appearance. Stock retains its original patina with a later coat of finish. Some minor splinters replaced around lock and barrel tang. Some other minor chips and scattered marks from use. This an extremely early and important Pre-Revolutionary War Moravian rifle. It is one of the best known and best documented examples of early American rifles. It is complete with a file of information relating to Andreas Albrecht, Moravian rifles and information comparing this rifle to other Albrecht's, most notably, the Lion and the Lamb Bayonet Rifle. Included are copies of the cover and pages featuring the rifle from each publication where it is shown.There is also a series of original photographs of this
rifle side-side with the Lion and the Lamb Rifle. PROVENANCE: Ex. William H. Myers Collection

LITERATURE: This rifle is featured on pages 50-53 of "Longrifle Articles Published in Muzzle Blasts" Volume I from issue 3 in 1997 by George Shumway. It is also shown in "Accouterments II" by James R. Johnston on pages 33-35 and on pages 51-55 of "Moravian Gun Making of The American Revolution" by the Kentucky Rifle Association and Kentucky Rifle Foundation. The rifle is also on the 2008 Kentucky Rifle Association President's Display CD.
CORRECTION: The trigger guard, side plate, lockplate and ramrod entry ferrule are, in fact, original to the rifle. Although it is stated otherwise in. The first Moravian book, I spoke with Judson Brennan, who did the restoration of this rifle. He kindly informed me of the errors in the book. The rifle was found in England and it was probably taken there as a war trophy during or after the American Revolution. The barrel tang for hooked breech was also on the rifle when it was discovered there. The lock is a very good professional reconversion, but the lock plate was on the rifle when it was found, but it had been converted to percussion. 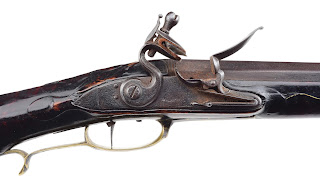 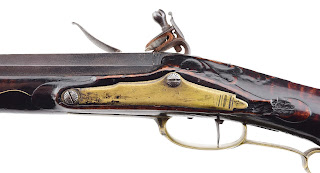 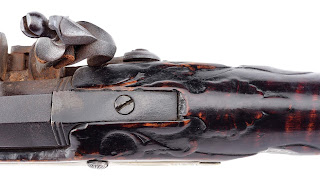 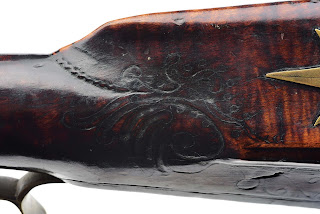 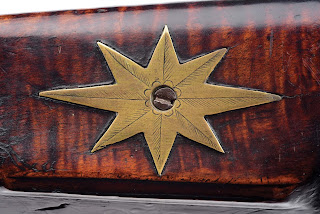 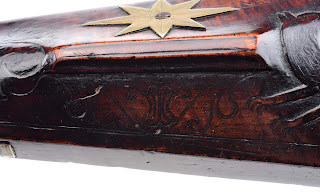 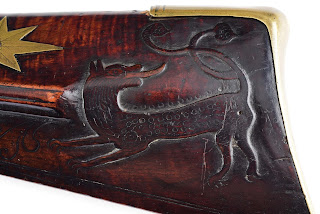 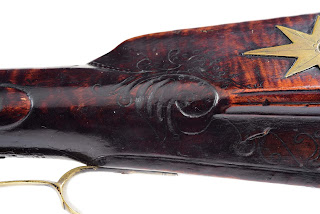 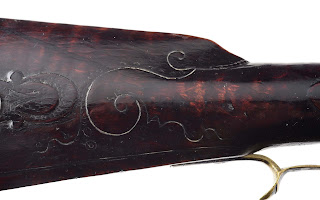 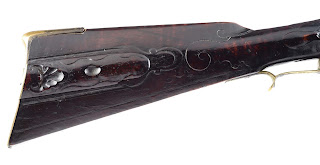 Copy and photos from Morphy Auctions here.
Posted by Contemporary Makers at Thursday, May 14, 2020