My Summer with the "Bag Lady" by Steve Radosevich 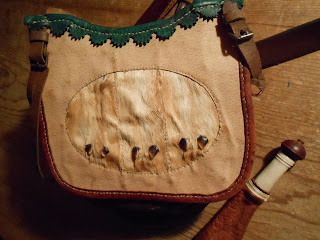 After a 35 plus year hiatus  from sewing leather into hunting bags and other things, I decided that this Summer would be my time to reintroduce myself to bag making and improve my  skill level. With a few events on the calender, I armed myself with bark tan, pigskin, and linen, and  planned to take advantage of the quiet times at said events. After some major construction instruction from my mentor and friend James Rogers, esq. , I embarked on my adventure. One of my first mistakes was to show my "artistic" sister what I was doing.  Oh! I want to try that!  Says she, so says I, well let's cut you up some leather, and away she went. That started this whole sibling rivalry thing of who can make the most bags. Well, what did I make you ask? A "Bag Lady", who has quadrupled my output and has turned into a leather monger, hoarder, and otherwise uncontrollable shopper at Oregon Leather, Tandy and any other place that sells that stuff. Fortunately, she has gone the way of Cain and murdered her brother and sews in a different vein than muzzle loading hunting bags. Although some of them may pass tolerably well for that as well. I did complete a few things this summer, despite all of the competition. All 5 of these bags have some basis in originals that I own or have been able to observe for sewing techniques and patterns. I wouldn't even venture a guess at a century or decade of origin for them. The first is of bark tan and a three legged road kill on the flap. Old harness hardware and strap. # 2 also bark tan deer, has a horse hair flap and a knotted bag attached. No. 3 is a shoulder model of the bag in Enoch Seaman painting, loosely speaking. (See James Rogers blog). No 4 is made of oil tanned pigskin and is a marriage of two original German bags, with more road kill on the flap. Great place to find parts. No 5 is downsized from an original German bag and thanks to my daughters dog who brought home a deer leg from, I don't want to know from where, I stole it and skinned it and alum tanned it for the flap.  (And yes I gave the leg back to her after I relieved it of it's cover!) 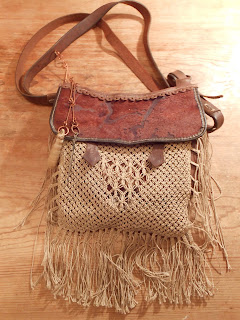 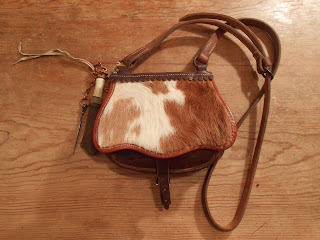 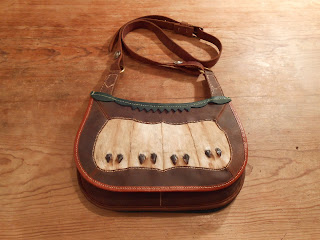 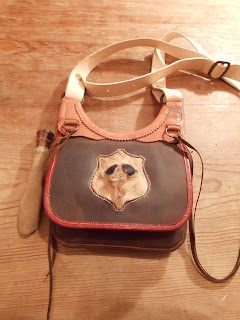