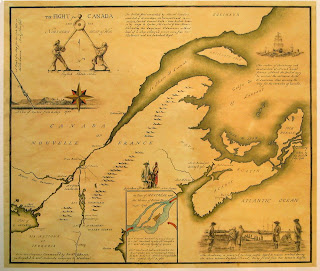 The British fleet commanded by Captain Saunders, consisting of 40 war ships, 100 transporters, and 18,000 sailors, carried General Wolfe and 9,000 British troops to lay siege to Quebec, the capital of New France. Navigating the dangerous St. Lawrence without a loss of a ship achieved praise even from Governor Vaudreuil and his Intendant Bigot. 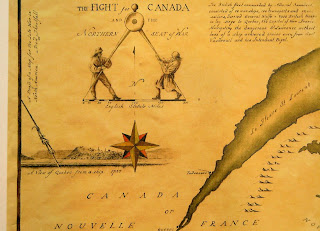 The vignette on the mid-left portion of the map shows the viewers what Quebec would have looked like from the view of a ship in 1759. 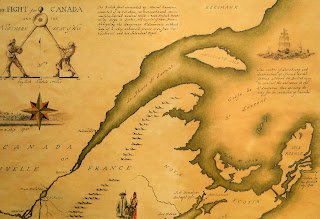 The vignette in the upper right portion of the map explains that the capture of Louisbourg and the destruction of the French naval forces allowed the British army to control the entrance to the St. Lawrence, thus opening the way for the invasion of Canada. 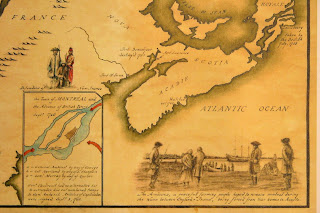 The vignette in the bottom right portion of the map explains that the Acadians, a peaceful farming people, hoped to remain neutral during the wars between England and France, being forced from their homes in Acadia.

The vignette directly above the inset at bottom of map portrays three "Defenders of New France", and the inset itself illustrates the three-pronged advance of British forces on Montreal in the early fall of 1760. Over 500 Iroquois, Commanded by Sir William Johnson, took part in General Amherst's campaign to Montreal. Governor Vaudreuil had no alternative but to surrender his outnumbered troops to General Amherst. Articles of Capitulation were signed September 3, 1760. F.T.
Posted by Contemporary Makers at Thursday, January 01, 2009