Prior to attending the Albany Congress in 1754, Benjamin Franklin began advocating for greater cooperation among the British colonies of North America. In May of that year, Franklin published an illustration in the Pennsylvania Gazette that hinted at the need for greater unity. Franklin depicted a dismembered snake, each representing a specific colony, with the line “Join, or Die” below the image. Throughout the French and Indian War, and later during the Revolution, the image of the snake was used on currency, newspapers, and flags, all suggestive of the need for the colonies to cooperate “under one government as far as might be necessary for defense.”

For this year’s CLF Fundraising Auction, artist Angela McMullen has recreated Franklin’s cartoon in a refreshing folk art painting. The American bald eagle, long regarded as a symbol of liberty and resolution, spreads its wings in front of a waving banner that depicts the “Join or Die” rattlesnake. The painting is bordered by a geometric pattern rendered in red, white, and blue, and the bottom of the painting carries the inscription “Benjamin Franklin 1754.”

McMullen’s painting was executed in quill/ink and watercolor on cream-colored pebble board. The painting comes ready-to-hang in a beautiful antique oak frame. This patriotic piece of classic Americana will fit a wide range of design schemes, and will make a graceful addition to any home. 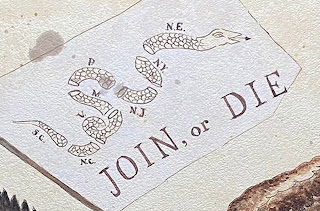 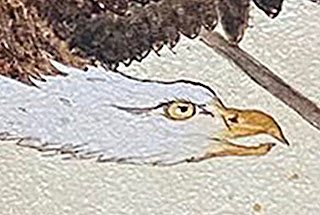 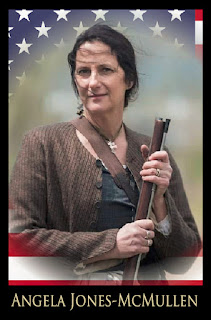 For more information on the work of Angela Jones McMullen, contact: naturelover91@hotmail.com

To see all the artists’ postings for the 2022 CLF Fundraising Auction go to: