During the French and Indian War, Captain Pierre Pouchot kept a meticulous record of the remarkable tribal cultures that he encountered in the North American wilderness. A keen observer, Pouchot left a priceless record of seemingly insignificant details which others easily overlooked. When explaining the dress of France’s Indian allies, Pouchot described a minor but vital part of a warrior’s leg wear. “They wear garters of beads, or porcupine quills,” wrote Pouchot, “bordered four fingers wide, which are tied on the legs.”

This year’s CLF fundraising auction will feature a richly decorated pair of Native American leg ties by Bill Wright, one of the country’s most respected quill artisans. Wright’s leg ties, each measuring twelve inches long, were crafted from deeply colored brain tanned deer leather and adorned with dyed porcupine quills straight from the back country of the Great Lakes. The reverse side of the ties carry linen panels, and the bottom edge of the ties feature another traditional tribal decorative detail: tufts of dyed red deer hair affixed to a row of aged brass cones.

Bill Wright’s work is in high demand, and his offering at this year’s auction affords collectors a rare chance to snatch up a piece of his art. The contrast of dyed quills against rich brown leather inevitably results in a visually appealing work of art that makes a fine addition to any display of frontier artifacts, and is well suited to both reenactors and collectors. 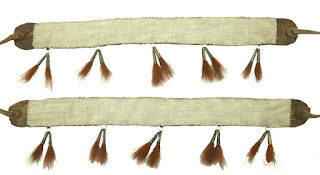 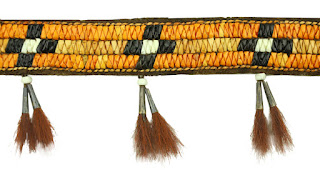 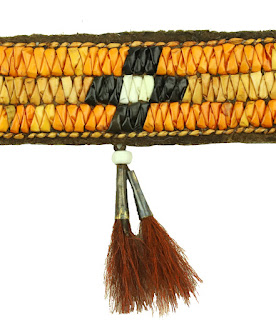 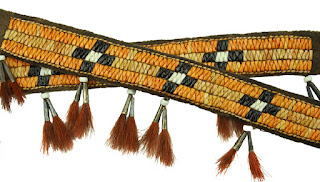 For more information on the work of Bill Wright, contact the artist directly: wrightsgarden@hotmail.com