Throughout the history of hand firearms, gunmakers endeavoured to produce a gun that could fire more than one shot in quick succession, as this would be hugely advantageous. The more obvious ways included using more than one barrel or a revolving breech with multiple chambers, but these innovations inevitably increased the size and weight of the gun, often making it difficult to handle and therefore impractical.

One of the less well-known methods used to produce a repeating gun, was the "super-imposed load" system.  This was quite simply, one barrel loaded with several charges, one behind the other, and with each charge having its own touch-hole, each load could be fired as and when required. In his masterwork on the subject "Superimposed Load Firearms1360-1860", David Baxter points out that a primitive form of superimposed load firearm is mentioned in a late 14th century manuscript, but it was not until the 1530s with the introduction of the wheellock that the system became a practical reality. The wheellock, was the first spark-producing gun lock and it revolutionised hand firearms, leading to the development of the pistol. Gunmakers were quick to develop the wheellock, which soon became very sophisticated and included locks with more than one mechanism mounted on a single lockplate [Fig.1].

Fig.1 - A detached double wheellock for a single-barrelled 2-shot superimposed-load pistol. Made by Balthazar Klein of Nuremburg, c1565.

These special wheellocks were made with several mechanisms, each mounted in-line, one behind the other, for use with a gun having a single barrel. The single barrel could be loaded with several super-imposed charges, one behind the other, each charge having its own touch-hole. This type of lock mechanism allowed the gun to be fired either one shot at a time, or in quick succession without reloading.

In the centuries that followed, super-imposed load firearms, using either a wheellock, flintlock, or percussion lock, were produced. [Fig.2] Many examples of these firearms, dating from the mid-sixteenth century through to the nineteenth century, are known and can be found in Museums throughout Europe. 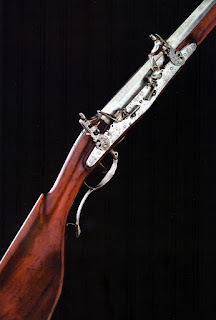 The small flintlock pistol featured in this article appears to be a common English "turn-off" pocket pistol of the type produced in their thousands during the last decades of the 18th and early 19th centuries [Fig.3]. 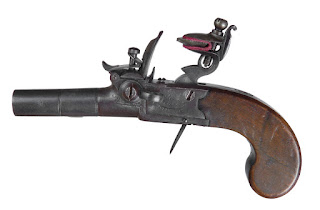 However, it is designed to fire a 2-shot super-imposed load from a single barrel. The barrel is made in 2 sections, each section screwing together using a very fine thread. This unscrews from the pistol frame (and breech), for loading in a similar fashion to an ordinary single-shot turn-off pocket pistol of the period [Fig.4]. 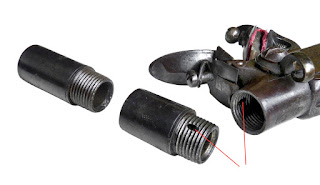 Fig.4 - The 2-section barrel and breech. The vent hole for the forward charge is drilled longitudinally forward and through the screw threads (indicated).

To load it, the barrel is first unscrewed from the breech, then the 2 sections of the barrel are separated. The rear breech chamber is loaded first, with powder and ball.  The rear section of barrel is then screwed into place, effectively becoming the breech for the second charge. The second charge is then loaded and the forward section of barrel is screwed on. A conventional ring-type barrel key is used to tighten or unscrew the rear barrel section, while a T-form key with squared end can be inserted into the star-shaped muzzle to unscrew or tighten the front section.

The pistol utilises a revolving pan with 2 primings to fire the two loads, which is manually operated by a small lever or tap on the left side of the pistols frame, the so-called "tap-action". This system is found on many pistols of the late 18th century to fire two or more barrels of a single pistol.  Two tiny touch holes in the pan connect to the two powder chambers. The hole that connects to the forward powder charge is drilled longitudinally forward through the screw thread where the rear section of barrel joins the pistol frame [Fig.5]. 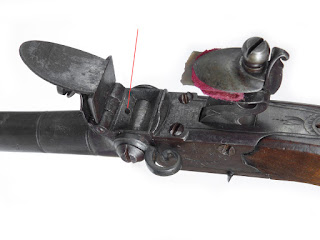 Fig.5 - The touch hole and pan set to fire the forward charge.

The resulting thinness of the metal at this point is alarming and it would take a brave man to fire the pistol - see Figure 2. The tap, which revolves the pan to expose a second priming, is then turned to fire the rear charge. A second touch hole connects to the rear charge [Fig.6]. 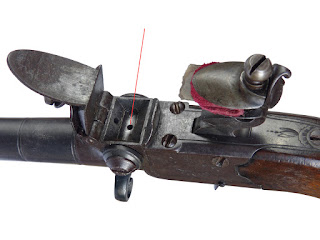 Fig.6 - The touch hole and pan set for the rear charge. Turning the tap lever reveals a second pan and second touch hole.

Although the pistol has the appearance of being constructed with a conventional box-lock frame, it has a large breech chamber that extends deeply into the action of the pistol [Fig.7]. 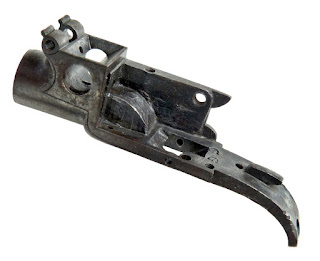 This unusual design has a two-fold purpose; it provides the necessary powder chamber for the rear section of barrel and also allows the pistol to remain a standard size.

Baxter uses the term "vertical tap-action" to describe these pistols. He illustrates several examples, some of which bear Birmingham proof marks and the signature of manufacturers Hayward & Goodwin. Baxter points out that the 1803 Birmingham Directory lists Hayward & Co, Factors, at Ann Street. In the 1805-07 directory published by Holden, the partners Hayward & Goodwin are listed as "flint manufacturers" in Ann Street. George Goodwin alone is listed, in 1808 as "Fine Gun and Pistol manufacturer, 2 Ann Street". It is interesting to speculate whether the initials GG cut into the inside frame of the subject pistol belong to gunmaker George Goodwin. Given that the pistol has Birmingham private proofs, this theory may well prove correct - see Figure 7.

The subject pistol dates to around 1800 and is signed with the single word "Love", on the left side of the frame. This is presumed to be Benjamin Love of Rugby, who is recorded as working in the town during the first half of the nineteenth century. Benjamin Love, the son of Joseph and Sarah Love, was baptised at St Bartholomew's church Wednesbury in 1785. No record of his apprenticeship has been found but he probably learned the skills of blacksmithing and gunmaking from one of the many metal working craftsmen who were working in Wednesbury, an area renowned for the production of guns. He remained at Wednesbury until at least 1810 when the baptism of his son John is recorded. Although Bailey & Nie list his gunmaking business at North Street, Rugby from 1834, he had in fact moved there by 1829, as the church records show that in October of that year, his wife Mary died aged 43 years and was buried at St Andrews church.

The 1841 Census for Rugby finds him now, aged 50 years, living with his 2 children, Elizabeth, Mary and grandson, John in Benns Row (part of North Street). His eldest son, John Love, aged 30 years, also a gunsmith, lived, together with his wife Fanny and their 2 young children, Alfred and Sarah, nearby at Horse Pool End in Rugby.

In 1846, Benjamin Love married his second wife, Susanna Buswell, 17 years his junior. In 1851 his business is still at North Street, Rugby and in the Census of that year he gives his occupation as "Whitesmith". His wife Susanna is recorded as a "staymaker". A whitesmith dealt primarily in tin goods but the term often included any iron items. With the availability of large amounts of cheap firearms from Birmingham at this time, many provincial gunmakers changed their businesses to that of ironmonger, tinsmith or whitesmith.

Benjamin's son, John Love, died in 1848 at the age of 38 years. In order to support herself and her 4 young children, his wife Fanny, aged 39 year is recorded as a washerwoman in the 1851 Rugby census, a common occupation for widows during the 19th century. 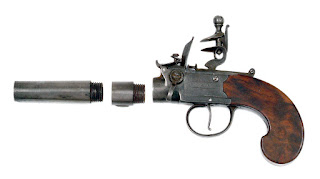