Pictured is my rendition of a 19th century Southern Appalachian Mountain rifle. Its sleek architecture, simplicity, delicate mounts and distinctive features (e.g. cheekpiece, sideplate, trigger guard and rear ramrod pipe) are based on two longrifles, one, a flintlock, attributed to Western North Carolina gunmaker Robert Hughes, or someone associated with him (Ivey, North Carolina Schools of Longrifles 1765-1895, Rifle  #197), and the other, a caplock, of very close resemblance, described as having been built by an unknown maker in Eastern Tennessee (http://americanlongrifles.org/forum/index.php?topic=24808.0).
According to those more knowledgeable than I, both guns were likely made by the same hand, although maybe not that of Robert Hughes, whose signed work is quite different (http://americanlongrifles.org/forum/index.php?topic=18547.0). Discovery of yet a third rifle, a nearly identical twin of the Tennessee caplock, in the Maryville area of East Tennessee raises a possibility that the maker of these pieces could have been someone, as yet unknown, who worked in that locale (ibid.). No one knows for sure.
Although inspired by these originals, this build is not a copy of either. While similar in overall appearance, it differs in a number of respects, including a few construction, finishing and decorative details that were gleaned from outside sources, are of my own design or both.
The vent pick inlay beneath the cheekpiece is an example. One of the original specimens, the flintlock, has such an inlay: a semi-circular iron disc that, to me, is not terribly interesting. So, I designed a different inlay, featuring, as its central element, a sharply scalloped “crown,” like that seen on the patchbox surrounds of rifles built in the area of Lexington, Ky., flanked by a skirt of my own creation. Although not engraved, this inlay gives a little pizazz to an otherwise unornamented rifle and, because it is a bit different, complements the unique sideplate and unusual rear ramrod pipe copied from the originals. 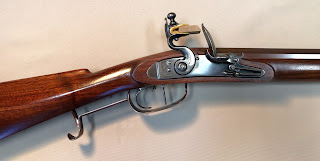 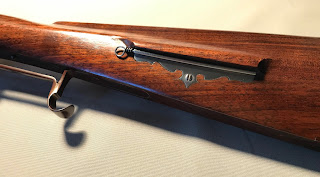 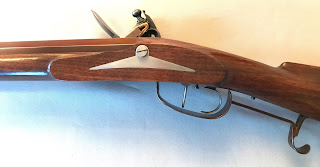 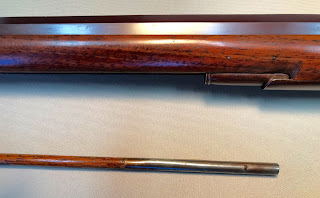