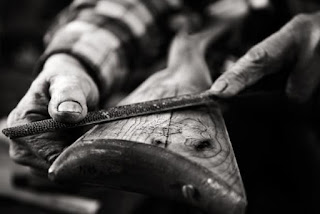 The blackpowder rifles that come out of Hershel House’s workshop hidden in the Kentucky backwoods aren’t just exacting, made-from-scratch re-creations of true frontier guns. The home-forged springs and screws, the hand-carved stocks, the focus on function and reliability embody the history of America.
By 1780, the American frontier was changing. In Kentucky and Pennsylvania and Virginia, in much of the old Ohio Territory and the big woods of Tennessee, the baddest of the big game was largely gone. The eastern wolves that terrorized the earliest settlements had nearly vanished, and so, too, the elk and bison. Bear and mountain lion remained, and deer. But anywhere the ring of an ax was heard, the report of the blackpowder rifle followed.
The frontier had opened up. A man no longer needed a gun designed to hurl a thumb-size hunk of lead into the nearest redcoat or hidebound predator or painted Shawnee warrior. He needed a gun stingy with lead and easy to fix and accurate enough to fill a bag with squirrels so he could feed all his kids who busied themselves clearing trees for another field of corn. Once the scary animals and natives were pushed from the verges of the American frontier, a man no longer needed a big-bore thunderstick. He needed a rifle like the flintlock Hershel House makes today, in the 21st-century hills of central Kentucky.
Wood, Iron, and Flame
Hershel House is among the world’s most celebrated flintlock rifle makers. He lives on a wooded knoll overlooking the broad Green River floodplain valley just outside tiny Woodbury, Ky., where he was born and raised. His heavily timbered property is littered with relics. Swages and coal forges crowd together under shed roofs. Parts, pieces, and entire Model A’s are stored under soaring oaks. His workshop is like a cluttered, narrow grotto, situated on the other side of a dogtrot porch of a hand-hewn log cabin House has built over the last 15 years.
In the mid 1970s, when the editors of the acclaimed Foxfire books on Southern Appalachian heritage were looking for a rifle maker to profile, they found their way to House and his tucked-away workshop. Since then, House has built flintlocks for three Kentucky governors and for Fess Parker, who played the title role in the old Davy Crockett TV series. He's landed two National Endowment for the Arts grants to provide for gunsmith apprenticeships, and restored the most credibly substantiated Davy Crockett–owned rifle known to historians. That flintlock was "just a junk pile" when he started, House says. It now hangs in the Tennessee State Museum. In 2009, House led a project—along with his brothers John and Frank, celebrated craftsmen in their own right—to build a special-edition Kentucky long rifle as a fund-raiser for the Contemporary Longrifle Foundation. Every piece of metal was forged by hand. It raised $140,000.

House does turn out embellished guns, such as this double patch box southern mountain rifle.
All told, House has built some 300 pistols, shotguns, Indian trade guns, and both flintlock and percussion rifles. And built does not mean assembled from kits. In all cases, House forges the main components of the guns, and in many cases, he has forged every single piece of metal down to the springs. He's made highly embellished firearms that sold for better than $10,000, although his last three rifles were simpler affairs that went for between four and six grand. "I reckon I've got a name now," he says, grinning. "Guys that bought those guns for $300 back in the '70s wish they'd held on to 'em." In fact, House-made guns are so sought-after and valuable that he himself owns but one.
Watching House work helps tease apart the tangled genealogy of the American frontier long rifle. The relationship between Kentucky rifles, Pennsylvania rifles, mountain rifles, squirrel rifles, and Tennessee rifles—all somewhat loosely applied terms—comes into finer focus. "They were all based on the big German Jaegers," House explains, referring to the rifled-barrel flintlocks brought by European immigrants that showed up in Pennsylvania sometime around 1709. Over the next hundred years the guns evolved into the fully stocked, octagonal-barreled rifled muzzleloaders with the crescent buttplates that would establish the reputation of both famous frontiersmen and a young nation itself. Broadly speaking, the term Kentucky rifle refers to big-bore guns built in the highly embellished style based in the Lancaster, Pa., region. The Kentucky reference grew from a wildly popular 1826 ballad that celebrated the feats of Kentucky hunters at the 1815 Battle of New Orleans. Later, a shorter, heavier, larger-bore version—the Hawken rifle—showed up on the Western plains. 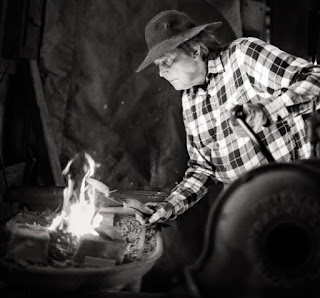 House makes major metal components of each gun -- in some cases, every piece.
But the rifle for which House is most recognized is a firearm more restrained and straightforward than many carved and engraved Kentucky rifles. It’s a .32-caliber squirrel rifle—a smaller, slender, subtler subspecies. Plainly outfitted with iron mountings instead of polished brass, it was a gun common to the frontiers of Virginia and the Carolinas from 1790 to about 1835. It is simple and elegant and frightfully deadly, and seems as fitted to House and his own life story as a hand-carved stock to a hand-forged patch box.
“You can see it here,” House says, bending over a rifle that appears to be perhaps half completed. This current project—he rarely works on more than one gun at a time—is a squirrel rifle for a customer from California who has taken a number of House’s gunmaking classes. (House leads multiday gun-building and knife-forging seminars from his Kentucky shop several times a year; for details, contact him at 270-526-3493.) “A squirrel rifle was sort of a fork in the road for the old blackpowder gunsmiths.” Once the basic elements were in place—locks, stock, and barrel—gunmakers could embellish the gun with elaborate carvings, engraved patch boxes, and highly figured buttplates and other metalwork. Or they could produce a gun far more suited to the evolving frontier edge.
By the latter decades of the 18th century, two factors drove the development of the squirrel rifle. First, the ornamentation of the earlier rifles was considered a drawback for frontiersmen who relied on the guns to feed large families. The engraved brass and silver mountings were expensive, and they glinted in the woods, scaring game. Squirrel rifles instead used iron fittings easily forged and fixed in the backcountry. The patch box itself was something you could do without, and save a few cents. A channel was carved into the stock for storing tallow for patch lubrication.
“On an earlier gun,” House explains, pointing to the gunstock just behind the lock, “they would carve a raised, ornamental panel called a beavertail right here. But you get into these squirrel rifles and those penny-pinching mountain folk didn’t want to put on airs with a fancy rifle. Some didn’t even have buttplates. They wanted the gun to be good and deadly. And if they didn’t have to have it, they didn’t want it.”
House has blue eyes set in an angular face like a hatchet, and a thick Beatle-like mop of brown hair despite the fact that he turned 70 years old last July 4. As he works a fine rasp between the lock panel and the stock’s wrist, sawdust falling like fine snow, House talks. After the American Revolution, “powder was hard to get and expensive, and lead was tougher to come by.” By making smaller guns, you used less lead and powder. “A .32-caliber squirrel gun would still kill a man if you hit him just right. And it would definitely kill a deer or a wild hog. But times were awful hard. I’ve read of guys that would shoot a squirrel in a tree then take their tomahawks and dig the bullet out and chew it back round to use it again. That’s how valuable the lead was.”
The squirrel rifle enabled hunters to forage the quickly civilizing edge of the western frontier, a place shifting rapidly from utter wilderness to a kind of prototypical suburbia. And that’s why American frontiersmen became such noteworthy marksmen. Game was getting scarce; lead was expensive. Every time you pulled the trigger, it had to mean something.
Which is why a rifle like the one that House makes will tell you the story of America.
Afield With the Smith 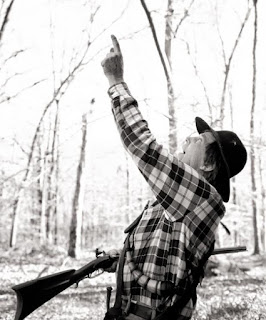 Copy and photos from Field and Stream Magazine here.
Posted by Contemporary Makers at Friday, January 10, 2020 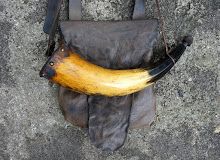