Around the Web: James Julia Auction

This exact horn is pictured in Tom Grinslade’s Powder Horns: Documents of History. Grinslade properly describes this historic horn as follows: The caption on the horn reads, “MARCH * 14 * 1775 * FRANCIS CARR*,” a date which indicates that the horn was made prior to the conflict at Lexington and Concord, perhaps when Carr first joined the Minutemen. The Royal British Coat of Arms, a hell-horse, a panel with the bust of a man labeled “CARR,” along with several birds, a snake and a deer decorate the horn. Pvt. Francis Carr marched on the alarm of April 19, 1775, in the Minuteman Company of Capt. Ebenezer Colby in Col. Johnson’s Regiment. During his service of six days, he went from Haverhill to Cambridge, a distance of about 35 miles, as listed in theMassachusetts Soldiers and Sailors of the Revolutionary War. The total number of men who are reported in the records to have marched on the Lexington alarm was about four thousand. Francis Carr, 1751-1821, was the father of U. S. Congressman James Carr and the founder of a Bangor, Maine political family. Carr was born in Newbury, MA moving to Haverhill and represented Haverhill in the Massachusetts House of Representatives. He is buried in Mt. Hope Cemetery in Bangor. A copy of text referenced where this horn is pictured is also included. There is a similar Revolutionary War horn with a much later 19th Century brass spout from powder flask on display with Revolutionary War arms at the Metropolitan Museum of Art in New York City. The word “Washington” appears to be a later addition on “freshened” inscription. 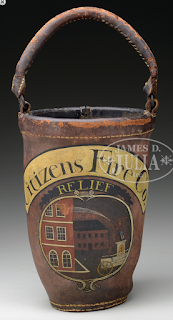 New England first quarter 19th century. The leather fire bucket with handle on iron rings, nicely decorated depicting a fireman fighting a fire in a 3 story building beneath a band marked “Citizens Fire Co.” in fine black calligraphy on oyster white ground within black perimeter above the word “RELIEF” in a foliate banner. The bucket in age darkened salmon red paint, the interior in early gray/green over original black. 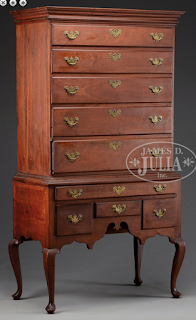 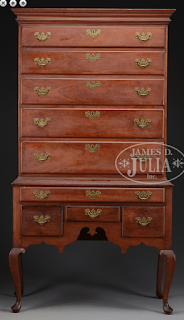 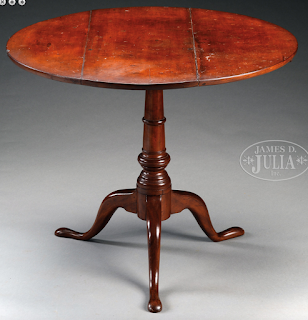 Circa 1775. Chapen scroll with turned shaft with suppressed ball at base with tripod type cabriole legs with pad feet. Constructed with three board top. Materials are cherry with ash cleats (probably replaced) and maple top block. Mid 18th century coastal Connecticut. This poplar example with heavily scrolled sides, front and back carved with an inverted pierced heart hanger above the deep well. The box fitted with a single dovetailed drawer joined by rose head nails on an overhanging base with molded edge. The box with original Spanish brown wash.

Copy and photos from James Julia.
Posted by Contemporary Makers at Sunday, February 07, 2016