Knife Designed by Harvey Hildebrand and Made by Sid Birt 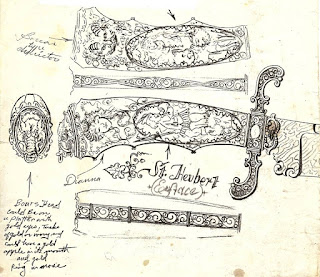 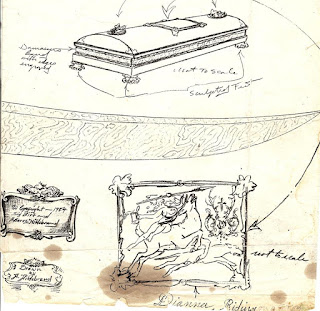 I consider this to be the most beautiful of all the blades I designed and Sid Birt built during the years we combined our talents. Based on 18th century Germanic boar hunting hangers Sid forged the blade from high carbon steel, the dark in the marbled pattern and nickel, the highly polished swirls in the blades pattern. The pattern was brought out in the blade when it was dipped in acid. The carbon steel would be etched but the nickel would not be affected. The pommel cap is a boars head on a platter, which I carved in wax and was then cast in silver with a fire-blued patina. A gold ring was fitted in the boar's nose and I carved ivory tusks from a piece of actual boar's tusk ivory. The late Pete Sours was the jeweler who engraved the guard and around the edge of the platter.
Of all the art knives I designed, this is the only drawing which survived. As artists go, I was my own worse critic, and like many artist's I destroyed a ton of preliminary and finished art over the years.
This blade went to an antique and contemporary arms auction at the Las Vegas MGM Grand Hotel in 1984 where it sold for ten thousand.
Keeping with a period Germanic theme I scrimshawed the right ivory grip with a traditional image of a Gothic hunter blowing his hunting horn. In his right hand he holds a boar hunting spear with it's cross guard. At his belt is a hanger and at his feet a slain boar. Over him hovers a stag's head with a cross between the antlers. The emblem of St. Eustace, Patron Saint of Hunters.
The left Ivory grip I scrimshawed with an image of a young Black Forest witch with a bird, a unicorn goat, and a fox. Above her is a sort of an Albrecht Durer inspired Diana, Goddess of the Hunt with her telltale crescent moon. 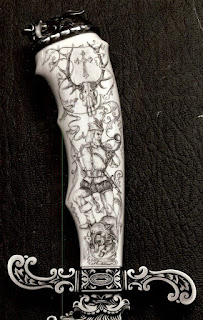 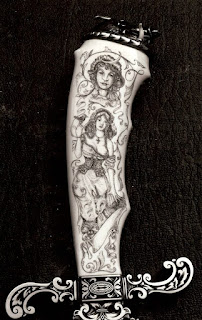